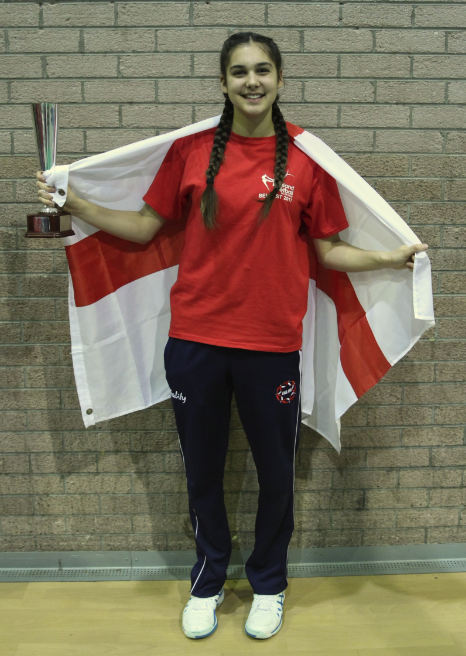 Ellie Rattu from Bedfordshire was selected into England U17 for Netball Europe March 2017.
Here are some words from Ellie about her experience:

After finding out that I had been selected to compete at Netball Europe, I attended an intense 3 day training camp up in Walsall along with the other 11 members of the squad.

The camp consisted of match play, where we were able to play against 3 different teams, and also technical and weights sessions.

This was such a great opportunity that allowed our squad to gel both on and off the court and get a taste of what to expect the following week at the competition, as the timings of our games mirrored our competition schedule. It was particularly special as none of us had ever competed for England before and so this was a completely new experience that we could share together.

Upon arrival to Netball Europe we had a technical session at the venue to get warmed up and in the right frame of mind for our upcoming matches in the days to come.

On the Friday it was clear that we were all equally nervous and excited to get our first cap and put on our England dresses. However we managed to keep it cool and secure our first win against Northern Ireland 61-19 where I played C for the second half.

I was in the starting seven for Saturday’s game against Wales and saw the nerves disappear completely as we dominated the first quarter 23-6, with a final score of 68-36.

On the final day we knew we had to beat Scotland to secure the title. We managed to come away with a clear and classy win of 78-22.

The highlight of the competition was receiving my first cap and proudly singing our national anthem, a moment I will treasure forever.

Netball East would like to congratulate Ellie on her selection and her success with the England U17 squad at Netball Europe 2017.