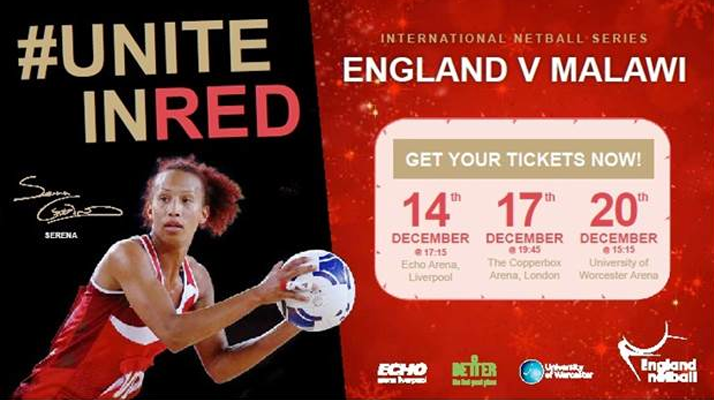 England Netball is delighted to announce that they will welcome Malawi for a three-match International Netball Series this December.

The Queens will face off against the ladies in red at the Echo Arena in Liverpool, the Copper Box in London and University Arena, Worcester. It will be a fantastic way to end the netball year as the surprise package of the Commonwealth Games will provide a tough test for Anna Mayes’ side. There will also be plenty of flair, passion and energy on display as Malawi bring their unique style of play to our shores during the festive season.

Our opponents for the three matches are currently 5th in the official INF world rankings and finished in this position at the Commonwealth Games in Glasgow following an impressive campaign which saw The Queens almost upset the mighty New Zealand before defeating South Africa in their play-off match.

England will be seeking to bounce back from heartache in Glasgow as the preparations for the 2015 Netball World Cup in Sydney start to intensify.

Tickets for this International Netball Series are on sale now:

As tickets are selling fast, you will need to complete more than one transaction if you'd like to buy more than 10 tickets. For more information, or if you need any help, please contact customer enquiries on 0333 300 9911