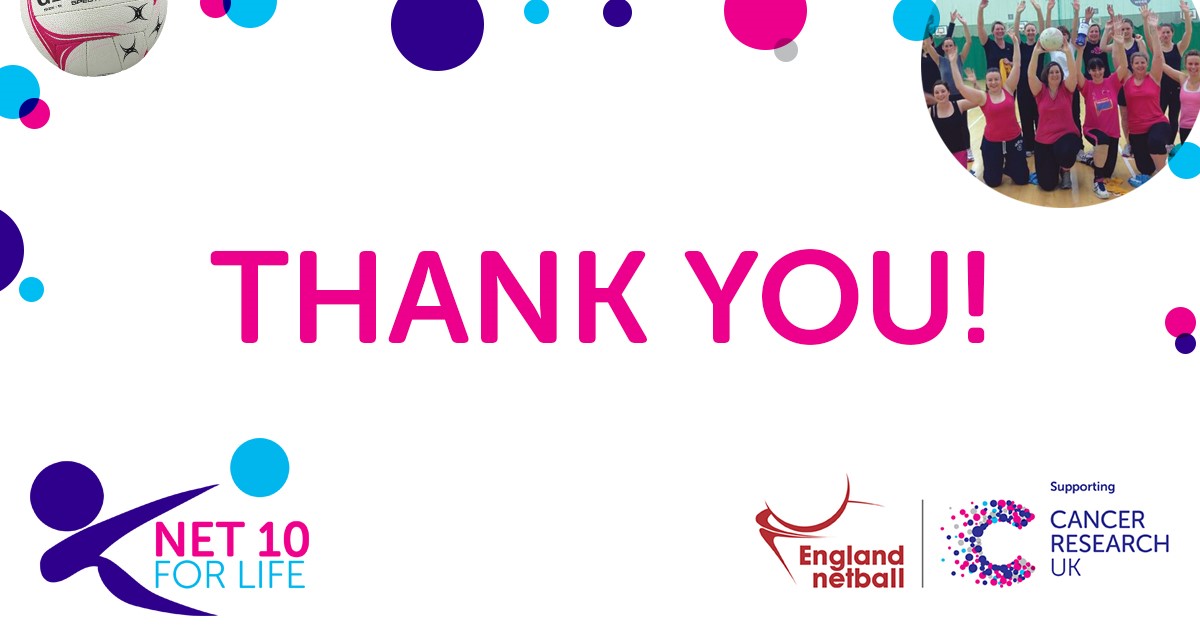 As part of England Netball’s flourishing partnership with Cancer Research UK, we continued our Net 10 for Life initiative to raise vital funds through our love for netball. For the fortnight beginning 10th March 2017, we encouraged every team taking part in this fantastic initiative to donate 10p per goal scored in their weekly fixture. Umpires were also encouraged to get involved, by swapping their whites for some pinks, and rounding any donations up to the nearest pound. At the end of the match, a willing volunteer needs to collect up the pledges and donate them online at www.justgiving.com/fundraising/East-England-Netball

Throughout the fortnight, many clubs, teams and individuals got together and raised money! There were many events taking place across the Region to raise money for Cancer Research UK.

From crazy colours to mixed netball sessions, we have had it all! Marine Netball Club in Essex raised £130 at their training session during Net 10 and had all the girls in silly socks and crazy hair! Well Done to Marine!

Our very own East Regional Coordinator, Florrie ran a mixed Netball tournament in Baldock, Herts and raised £318.97! Thanks to all those who were involved and supported.

Norfolk Netball Satellite and County Academies were keen to support Net 10 this year but as they don’t play matches they decided to hold a series of “Netball Challenges” in which each athlete would compete with a friend or family member. There was a prize for the winners and asked everyone to make a donation as a form of entry. The challenges were aimed to test a range of different netball skills as well as have fun! They raised a total of £362.06 Well Done!

The wonderful Walking Netball ladies from Silsoe in Bedfordshire ran a raffle at one of their sessions and wore pink and raised £135! Well done to you ladies!

Mixed Back To Netball sessions in Baldock, Herts raised £175.50 at their sessions over the fortnight!

Roundwood Park School held a students Vs teachers Netball match, players from each squad also went to their local leagues and sold pink shoe laces in aid of Net 10! During March, 10p per goal was donated at any of their league, cup and district matches. Special shout out to the year 9’s who raised over £110! Well Done and Thanks to all involved!!

On Saturday 25th March 2017, 7 teams from Bedfordshire, Essex and Norfolk took part in a Walking Netball Festival at the UEA Sportspark in Norwich.  It was a fantastic to see so many ladies enjoying walking netball and a great team spirit played by all.  After 42 games of netball the eventual winners were Silsoe from Bedfordshire with runner up from Dereham in Norfolk.

A huge thank you to all the teams for coming along, to the hosts and Kerry Lincoln, Joan Girling and Anne Harper for umpiring all afternoon.  At the end of the tournament we ran a raffle to raise money for Net 10 for life and I am pleased to say we collected £138.00.  A thank you to Hertfordshire Mavericks and to the UEA Sportspark for donating raffle prizes.

Hertfordshire NDCC, Lucy Ponting ran a Net 10 Tournament at Stanborough School, Welwyn, Herts and raised £445!! It was a busy evening at Stanborough School on Monday 27th March, for the Herts Net10 For Life tournament, where 12 teams from around the county joined us to participate! The winners were Silsoe Slugs, a Back to Netball group from Bedfordshire, closely followed by Heath Harriers, another Back to netball group from Hertford Heath. Wodson Park Navies came in third place and a special mention goes to Camelot Crusaders, a workplace team from Watford who joined us for their first ever tournament! Lucy Ponting, (Netball Development Community Coach) said, ‘I am overwhelmed by the amount of money we raised. It truly was a great evening, the sun came out for us and there was a great atmosphere. I must thank all the umpires, supporters and my colleagues for all their invaluable help’.

We would like to thank each and every one of you who supported and donated. Together We Will Beat Cancer Sooner.