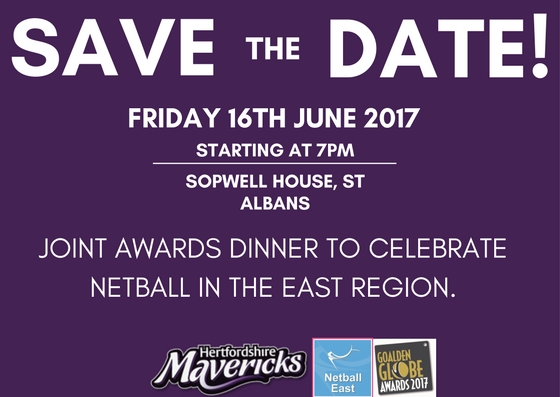 Netball East will be combining the Goalden Globes 2017 with Mavericks to host a join Awards Dinner on Friday 16th June 2017 starting at 7pm at Sopwell House, St Albans.

This is a reminder to get your nominations in before 1st May!

For more information on nominations, please see below.

In the annual nominations are sought across the following categories:

Closing date for all nominations is 1st May 2017

All nomination forms (except Rose and Long Service) need to be sent to East@englandnetball.co.uk

If you are submitting a Rose or Long Service please send directly to Volunteering@englandnetball.co.uk

To support you with your nomination please download the Goalden Globe 2017 Nominations Information Pack with lots if useful hints and tips in regards to completing the correct nomination form.

Nominations are also sought for the following 2 awards which will be awarded only nationally in September at the Goalden Globe Awards:

The Rose Award and National Long Service Award are presented at the discretion of the National Panel and as such are not guaranteed to be presented annually.

The Rose Award and National Long Service Award are not presented at a Regional level; all nominations should be made using the specific nomination forms above for each award and returned directly to Email: volunteering@englandnetball.co.uk  at England Netball.  Or via Post: England Netball, C/O Goalden Globes, Netball House, 1-12 Old Park Road, Hitchin, Hertfordshire, SG5 2JR.

Individuals may self-nominate for the England Netball Long Service Award.